What a marvellous morning we all had today at Cofton Park. We had close to 100 pupils and over 50 adults ranging in age from 3 to 80! (Well done to Jo for doing her sky dive to raise funds for tree planting).

Today’s event was to formally launch the partnership between Birmingham Trees for Life and the Woodland Trust. Even though this has been operating for some months, this was the first opportunity we all had to get together and celebrate what we hope will be a long and mutually beneficial collaboration. Our youngest participants came from the Nursery at Rednal Hill Primary, and next in age came pupils from Albert Bradbeer Primary Academy, followed by students from Turves Green Boys’ School, Perry Beeches Academy and the more mature horticultural students from Birmingham Metropolitan College.…..and finally the staff and supporters from the Woodland Trust and Birmingham Trees for Life. 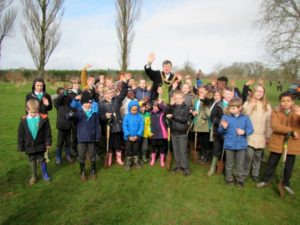 We were also joined on site by theLord Mayor of Birmingham who was awarded super star treatment by all the pupils who wanted their photographs taken with him and also his autograph!

BTFL,Woodland Trust Staff, volunteers, pupils and parents would like to thank the Lord Mayor for his patience! If you link to our album you will see that he was well and truly mobbed! BMet’s more mature horticultural students just got on with the task and soon completed the area they had been allotted, so began checking the whole planting site to make sure no spare whips remained. 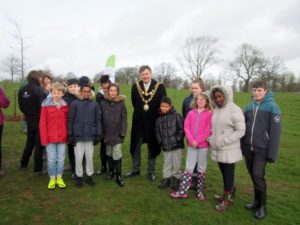 Perry Beeches Academy were delayed by traffic but arrived just in time to take over from the departing Nursery pupils and check the standard of their planting. (It appears it was very good!)

Turves Green Boys’ School (below) and Perry Beeches have been on several sites this year with BTFL so we were confident that they would do a good job! 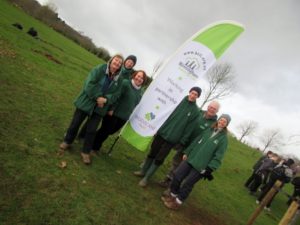 Thank you to Kate for her imaginative photograph of the BTFL team on site today!)