We had such a busy and enjoyable day at Pype Hayes Park today, and I will give a mention to all concerned a little further down this blog but I have to mention the resiliance of the 26 pupils from Paget Primary and their staff/parents. They arrived on site in glorious sunshine and within seconds of admiring a huge rainbow that had appeared we were all caught in a very heavy rain shower…..but no worries, as we took to the shrubbery to shelter!! 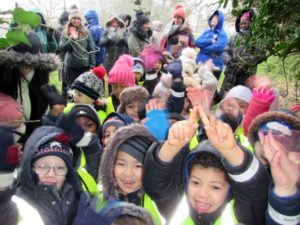 Just as soon as it had arrived, it passed and the sun shone again.

Safety talks were done, spades issued, trees collected and off they went to begin the planting of 800 whips in a strip across the park.

Immediately, on their heels, we welcomed pupils from Abbey RC Primary, SS Peter and Paul Catholic Primary and Arena Academy. Once again, after a brief introduction, they were planting in rows at speed! So much so that it took just over one hour to get 800 trees into the ground….. 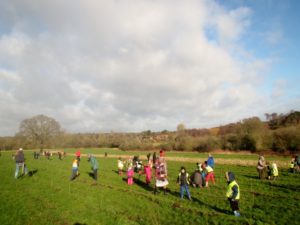 For this event we called on as many of our ‘adult’ supporters as possible to assist us, as we knew we would have lots of primary pupils on site. They did not let us down and we were supported by several Forest School Leaders and parents with their school groups, staff from ‘Nite Nite’ and two members of the public who volunteer when they can. Thank you all for helping to make this relatively busy event run so smoothly. We also welcomed several local councillors and our youngest trainee, Cllr Alden’s daughter …who slept through it all. (To be fair she is still very young!) 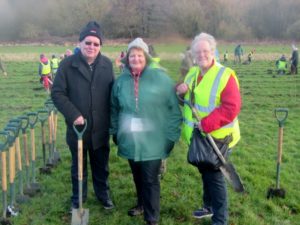 It was a fairly busy planting but we did take a few photos, so follow this link to catch up. 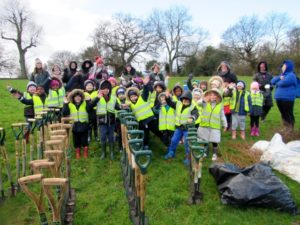