We are so sad to hear of the death of Councillor Ray Hassall who was instrumental in the formation of Birmingham Trees for life.  Councillor Hassall often joined BTFL staff and schools planting in city parks, and continued his support when undertaking his role as Lord Mayor. BTFL were privileged to be nominated as one of the ‘Lord Mayor’s Charities’ during his tenure. 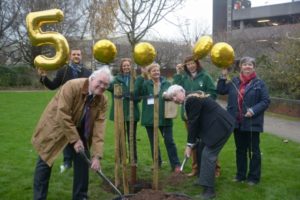 Planting trees with the charity he helped create, which has now planted nearly 70,000 trees across the city- what a wonderful legacy, and thousands of Birmingham schoolchildren who help plant those trees will have lovely memories of their tree planting. Birmingham will be a greener place because of his vision
Remembered fondly by all at Birmingham Trees for Life