The Lord Mayor was joined at Lickey today by the Chairman of Birmingham Civic Societyand the Chairman of BTFL to help plant 25 new specimen trees in an area below the Visitor Centre. The Lickey Rangers had enlisted the support of their Tuesday volunteers to do a lot of the hard work in advance, digging the holes and pre-planting some of the trees, in what proved to be extremely wet and muddy conditions. 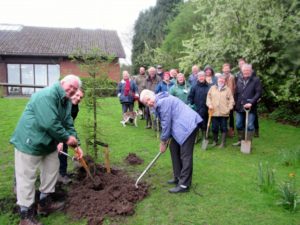 The event was held as part of BTFL’s contributions to celebrate the 100th anniversary of the founding of the Birmingham Civic Society in 2018. The 25 new and unusual trees have been added to the existing arboretum area and it is hoped that this will now be known as the ‘Civic Society Centenary Arboretum’.  Members of the Lickey Hills Society and the Civic Society, together with some members of the general public, helped to plant the last few trees on the day. 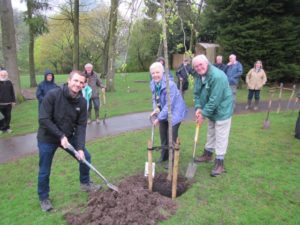 Conditions today were wet and very muddy as our photo album will show !

After the planting we were treated to a walk amongst the unusual trees of the arboretum area, with identification and descriptions by Simon Needle, followed by hot drinks and biscuits in the Old School House.

Our thanks to Steve Hinton and Simon Needle for working with the volunteers to prepare the site and help us avoid the worst of the mud!

Congratulations to Birmingham Civic Society on 100 years of their work in Birmingham.