Well we have been looking forward to this moment for weeks, months, even years! But 16-years-ago when BTfL planted its first tree who could’ve ever imagined that the small project working just five months a year every two weeks and only in term time could achieve so much, plant so many trees, work with over 7000 children  6800 adult volunteers at 325 tree plantings in so many parks and open green spaces across the city of Birmingham – well BTFL did of course!

As the years passed by and one milestone of 50,000, passed and then another and another we were always working to that magic number of 100,000 trees.

Our 100,000th tree celebration event took place in Cannon Hill Park, one of the most popular and best loved parks by Brummies, and brimming with beautiful trees – BTfL just added five more. 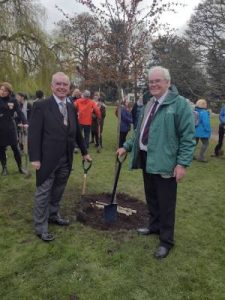 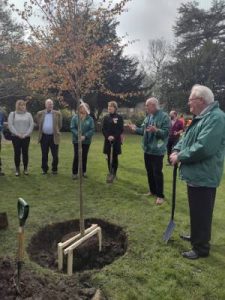 Friends of BTfL, all the people that have supported us and helped get us to this auspicious point in the BTfL Project. All the wonderful guests helped us plant the first four trees by picking one of four tree photos out of a bag which deisgnated people into four groups. Then Geoff Cole,  Sue Griffith, Viv Astling and Simon Needle, as well as Steve Hinton, led our four groups to their designated tree for planting. The first four trees planted were Corylus allevana Contorta – Twisted Hazel, led by Steve Hinton, Catalapa bignonioides – Indian Bean Tree, led by Viv Astling, Arbetus unendo – Strawberry Tree, led by Sue Griffith and Zelkova serrata Green Vase – Related to the Elm, led by Simon Needle. Everyone managed to help plant the tree, by shovelling in the soil, and bedding down the trees one by one. But please remember that all the trees we have plnted this year are also planted and gifted to the Queen as part of the Queen’s Green Canopy Platinum Jubilee celebrations. For our fifth and final 100,000th tree, Cercidiphyllum japonicum – Katsura / Candy floss tree we all came together with Geoff  Cole leading the way and planting with the Lord Mayor’s Deputy’s Deputy, Councillor Mike Leddy. Not ony did we plant the tree, we also buried our BTfL time capsule, full of BTfL memories, including poetry, photographs, our merchandise, a letter outling our legacy and a letter to the future, writing how much we hope trees will figure hugely in the future whenever our time capsule is found and opened.

As we all took a moment to think together around the tree, it was moment of pride for all the members of the BTfL team passed and present to enjoy knowing that we have made our city much cleaner and much greener  filling it with beautiful trees and woodlands for every single one of us to enjoy.

As always with BTfL whenever we plant trees there is lots of chatter and Communitea! The only thing missing was the tea!

As we asked all our guests to join us for afternoon tea in the Foyle’s Room at the MAC, it was time for some speeches and some thankyou’s with three short films made, we hope in some way to sum out the BTfL Project and share a bit of the magic we enjoy at every planting. Our guests watched while eating the beautiful afternoon tea and enjoying the celebratory pamphlet we had provided for them. Not only that we asked guests ot write, a message, poem, memory, or story for us to remember each guest by on a green leaf tied with ribbon. Here are some of the messages –

BTfL, what a fantastic legacy, a tough act to follow and I hope 100,000th tree is just the start…, The best time to plant a tree was 20-years ago, the second best time to plnt a tree is now…., To the future, for our children and our chilren’s children…., Plant as many trees as you can evey year, save the planet, it is in your own hands…. Speeches were led by Lord Mayor’s Deputy’s Deputy, Councillor Mike Leddy,  Cllr John O’ Shea, our Chairman Geoff Cole, who talked affectionately about the history of thr BTfL project, Deborah Needle and Justine Marklew, celebrting the 1000’s of children and adult volunteers who have joined us over the years.

Then there was a poem by Birmingham Poet and Children’ author, Mandy Ross read out to our guests, which summed up the BTfL project beautifully.

Birmingham’s One Hundred Thousand Trees for Life    by Mandy Ross

Read to the beat of this traditional counting rhyme?
One, two, skip a few, ninety-nine, one hundred.

Then Viv Astling presented founder members of BTfL, Geoff Cole and Sue Griffith, beautiful hand carved wooden gifts as a reminder of and testament to their amazing achievements over 16-years. Finally, Simon Needle, the super hero of the BTfL project looked to the future of BTfL, Birmingham Tree People. Trees and Tree policy in Birmingham.

So all in all a wonderful day in a room full of BTfL family and friends enjoying a very special moment together!

And as for the future you ask? Well the future’s green because for BTfL – it always has been!

Please view our album of photos for this event here