Birmingham Trees for Life (BTFL) is a project devoted to promoting awareness and understanding throughout the city of the value and importance of trees, planting trees across Birmingham’s parks and open spaces, and involving local people, especially the young, in planting trees. 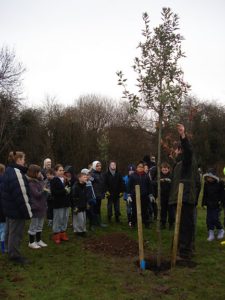 BTFL is a partnership between The Birmingham Civic Society and Birmingham City Council. Formed in July 2006, BTFL spreads the message that trees matter, helps to ensure that more trees are planted, and that those we have are valued and looked after. By working in partnership, the two organisations have access to both the land and resources to plant and maintain trees and woodland in Birmingham’s parks and open spaces*.  100,000 trees have now been planted across Birmingham since the project started, and almost 14,000 local volunteers, including over 7000 school children, have been involved.

You can find out more about BTFL by watching our short video, which was filmed in 2014.

* BTFL is not involved with street trees in Birmingham – the planting and maintenance of street trees is managed separately by the City Council and its Highways Contractor.