Fruit trees and orchards are growing in popularity, not only because people enjoy growing and eating their own fresh produce, but also to conserve Britain’s rich heritage in orchards, and to help in wildlife conservation, especially threatened bees.  BTFL has been involved in conserving and creating orchards since 2006.

The Friends of Cotteridge Park campaigned to buy some rough ground to create a community orchard next to the park, for local residents and schoolchildren to enjoy.  BTFL held an Apple Day on the site in 2006, with a display of over 200 varieties of apples to taste, and the first apple trees were planted. With further trees planted the following spring, an orchard of over 20 trees now provides fruit for the local community. 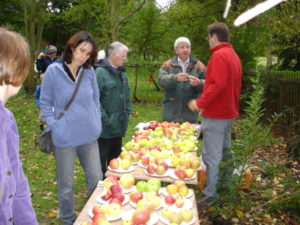 The first Apple Day in Cotteridge, with apples provided by nurseryman Nick Dunn of Tenbury Wells, Worcestershire, proved so popular that BTFL joined forces with The Birmingham Botanical Gardens and organised two more Apple Days in the autumn of 2007 and 2008.

The conservation of traditional orchards is very important, and in 2007, BTFL started a long term project to help the Committee of the Edgbaston Guinea Gardens manage their amazing collection of old apple trees within the heritage allotment site, located only two miles from the City Centre. Originally laid out around 1850,  the Edwardian diary of a plot holder lists some of the many apple trees cultivated at that time; over 60 known varieties have now been identified, including some rare old ones such as Calville Blanc d’Hiver and Golden Spire.  To help restore the old trees, BTFL funded a course to ensure the old trees could be pruned properly to extend their life.

In 2008, BTFL worked in partnership with the Guinea Gardens Committee to clear a disused plot and create a new orchard. This, together with the school garden which shares the plot, won an award in 2009 for the best new allotment plot in Birmingham.

In March 2011 the old orchard in the walled garden at the rear of Park House in Sutton Park was restored by Friends of Sutton Park, including the local bee keepers.  BTFL funded 28 new apple trees, mostly varieties local to Staffordshire and Worcestershire.  The Park Rangers will be working with local school children to look after them and harvest the fruit.

The Lickey Hills Rangers @LickeyHills, Friends and Conservation volunteers started a new orchard in an open area of the park in 2011-12, with further trees added in December 2012 and subsequently.  Because deer are present in the park, the young trees were protected with wire guards.  Lots of old varieties of fruit trees were planted to create a heritage orchard with many different historic local Worcestershire varieties.  The Rangers hold an annual ‘Wassail’ to celebrate the fruitfulness of the orchard.

U3A Sutton Coldfield asked BTFL if we could provide them with fruit trees to create a new community orchard at New Hall Valley to celebrate the 30th anniversary of U3A in Sutton. We were pleased to provide 20 heritage apple trees, which were planted in February 2013 by over 40 members of U3A.

The Sheldon Country Park also gained a new orchard next to the farm yard in March 2012, when children from nearby Grace Academy planted 15 traditional apple trees, which are cared for and harvested by the Friends of the park.

In partnership with Buglife’s Urban Buzz Birmingham project, we planted a new community orchard of 20 fruit trees at Cofton Park in 2016, as part of Urban Buzz’s project to increase the food sources available to pollinating insects in Birmingham.

Also in 2016, we planted 8 apple, pear and plum trees in a new community allotment garden on the Bromford housing estate with local residents.

In response to a request from residents, we planted 10 apple, pear and plum trees in the open spaces adjacent to these tower blocks in 2016/17 with a local school.

Trustees asked us to plant fruit trees for users of the Hub to harvest from in 2018 – 10 apple and pear trees were planted in the grounds.

In November 2018 a new orchard was planted beside the Harvest Fields Community Centre – children from Little Sutton Primary School and staff from Waitrose Four Oaks, who supported the event, planted ten apple, pear and plum trees.  In January 2020, a further 6 trees were added to the orchard.

Members of a local environmental group, SEAT, requested fruit trees for their local patch beside the River Cole in 2018, and BTFL supplied 10 apple, pear and plum trees for the group to plant.