What started out as a slightly grey and dull morning, quickly turned into an energetic ball of fast and furious fun in Highgate Park. BTfL were planting five multi-stemmed Silver Birch trees to make a natural screen for an ugly wall in the corner of this beautiful Victorian Park. Making it a little bit prettier and much greener with the help of 15 smiley children from Chandos Primary School, six fantastic volunteers from the Ahmadiyya Muslim Women’s Association and Dame Christine Braddock, the Queens representative  for the Queens Green Canopy Platinum Jubilee celebrations, of course the brilliant Woodland team and not to mention three members of our dedicated BTfL committee and organised by the City of Nature Alliance Member Project.

Highgate Park with its 146-year history was opened in 1876, the first park created by a town council, itself. It was opened to give city dwellers in a largely industrious built up areas some green space go enjoy – so the idea of nature to aid wellbeing isn’t such a new thing after all! The park was hit by 200 German bombs in the Second World War, but was restored graciously in 1952. 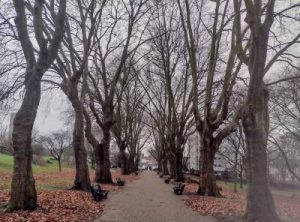 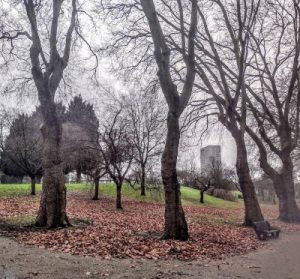 Today the park is used by everyone in the local area, strolling and chatting, dog walking, jogging, a short cut, a quiet place to sit and cool place to shade and is as important today to it’s residents as it was when it first opened. The bandstand and park keepers cottage may be gone, but it’s centre of the beating heart of Highgate can never be underestimated. The children from Chandos Primary School told us just how much they used the park and how important it is to them. So, we were happy to tell them that these trees are now part of the park’s legacy and part of these children’s personal legacy.  With that in mind the children quickly organised themselves into BTfL Tree Champions and mini BTfL Tree Champions as the Year six children mentored the year one children at our tree planting event. These children were so eager to get planting, they couldn’t wait to get hold of the spades and start digging and scooping. Taking a great interest in what type of trees we were planting, investigating the branches and buds, eager to see the trees in Spring time covered in beautiful green leave and taking the tree labels back to school to share their knowledge with their pupils. One eagle-eyed student was eager to know why the label stated, ‘tree passport?’

Great question BTfL said, and explained that the passport is an official label for the movement of trees within Great Britain and crown dependencies, demonstrating compliance with plant health. With a disappointed look the eagle-eyed student remarked, ‘oh I thought the trees are came over on a plane from a nice hot country where they had been on holiday!

What a lovely idea!

The children were quick to tell us that many of them lived locally and would be able to see the trees from their homes. ‘Well give them a wave each morning, show your friends and family these beautiful trees, explain their importance to the local area and of course let everyone know that you were planting thee trees for everyone who uses the park and live in the local area and of course the Queen!,’

‘The Queen?’ they gasped.

Wide-eyed wonder took over as Dame Christine Braddock explained that the children we were also planting these trees as part of the Queens Green Canopy celebrations, asking everyone who can to plant a tree to do so.

‘So we’re helping out the Queen today?’ one student asked, ‘Oh Yes, BTfL explained, and how many children in their lifetime can say that – not many! So, it was decided that the students should name the trees – just in case the Queen ever came to visit them – well we believe it could happen! So, her Majesty  can enjoy all the wonder of Team Tree, Head Tree, Silver Tree, Queenie the Tree and Chandos the Tree! What beautiful names. But not only was the energy from Chandos school a beautiful thing, but having six wonderful volunteers from the Ahmadiyya Muslim Women’s Association in Birmingham at this planting too. This fantastic community organisation who have groups all over the country will be celebrating a very special milestone this year too – their centenary. And to celebrate they are planting 100,000 trees. We are honoured that they chose to come and complete part of that milestone with BTfL and we thank them very much for doing so. This is the first of their three visits to tree planting events with BTfL, so watch the space.

But we had to say SNAP! Because it’s a special year for BTfL too as we will be reaching our 100,000th milestone – this season we will plant our 100,000th tree in Cannon Hill Park in March 2022! So many trees and so much to celebrate!

So we celebrate more trees in the ground, more greenery to enjoy, cleaner air in an industrial area of our great city, more emotional investment from local children in the area, a school that no doubt would love to come back with us and plant some more trees, BTfL helping achieve a centenary of 100,000 trees planted this year by Ahmadiyya’s Muslim Women; Association, not to mention adding to HRH QGC Platinum Jubilee tree planting celebrations and achieving part of the City Of Nature’s Alliance plan for the city! Well for a cold dank Tuesday morning we think we all did quite well. So always remember that mantra – team work really does make the dream work! Thank you everyone. Please view our photo album from this event here