Well it was a full house today! We had 750 trees to plant at Highfield Farm Rec and we had 13 eco warriors from Quinton Church Primary School, four lovely teachers, 12 volunteers from, Ian Williamson and Midland Heart , as well as a team of 15 from Birmingham’s Homeless and Modern Day Slavery Trafficking Services, local councillor Kate Booth and Deputy  Lieutenant to the Queen, Dame Christine Braddock. The only question was did we have enough spades? Why of course we did, BTfL never fails to help anyone wanting to plant a tree to grab a spade and just start digging – it’s part of our DNA!

One of our volunteers, looked worried, ‘we haven’t brought our own spatula’s, will you have enough!’

With a puzzled look we reminded this lovely young man we didn’t have any spatula’s, we only had spades! With collective giggles we were told by the group that he wasn’t familiar with the names of garden tools  and the was no gardener – or even chef by the sounds it!

When the children marched to the site in their wellies we knew they meant business. Asking them how many trees they might want to guess we had planted in 15 years guesses ranged from 15 trillion (we wish) to 100, 2000, 10 million, (we wish). When we told students that this month we would be reaching a whopping 100,000 trees in the ground their was a collective gasp and excitement at the thought of being part of building up to that huge number. 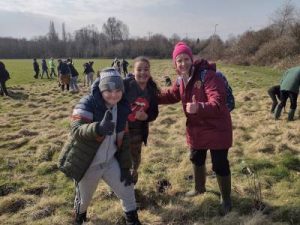 The evidence of our past effort was clear to see at the end of the Highfield Rec  where there stood a small woodland of trees that had been planted ten years previously. Looking healthy, and loved and about ready to burst into leaf in a few weeks time. 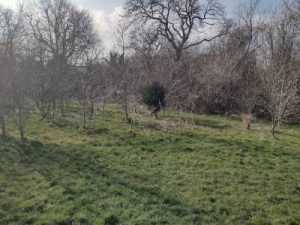 ‘More trees please, more trees please,’ came the requests from the children. The dedicated BTfL team were happy to distribute the trees and it was hard to keep up with the pace. One young man Levanta, worked tirelessly and after handing him seven trees to plant, we thought it would keep him busy, but five minutes later Lavento want more trees – he had planted them in record time. When the children and volunteers had arrived on site they couldn’t believe we could plant 750 native British trees in two hours- but we did it in less time than that. 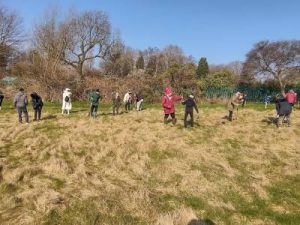 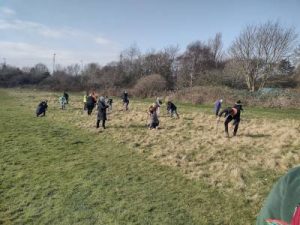 And if we all put that into perspective – a mature leafy tree produces as much oxygen in a season as 10 people inhale in a year. We did the maths at Highfield Farm Rec and so in a few years time these trees will be providing oxygen for 7500 people on average.

A single mature tree can absorb carbon dioxide at a rate of 48 pounds per year, we did the maths at Highfield Farm Rec and so in a few years time these trees will be absorbing up to 36,000 pounds of carbon dioxide per year!

And I’m sure when we think of it like that, it’s a legacy we are all very proud to be part of! A huge thank you to Quinton Church Primary School, Birmingham’s Homeless and Modern Day Slavery and Trafficking Services, Ian Williamson, Midland Heart, Dame Christine Braddock Deputy Lieutenant to the Queen, Councillor Kate Booth, Jim and Leon from the  Woodland Team, Geoff Cole, Sue Griffiths,  Viv and Hazel Astling and Stevie Prior all proving when you pull together as a team great things happen – Happy Tuesday everyone!