At BTfL planting trees is our life’s work and we enjoy every single minute of it. The events are always exciting, it’s always joyful work, a great place to connect, laugh together, dig deep together and enjoy and celebrate everyone that joins us – today was no exception. 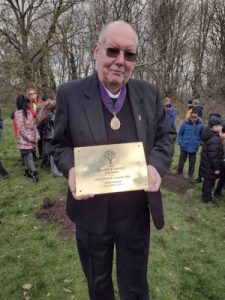 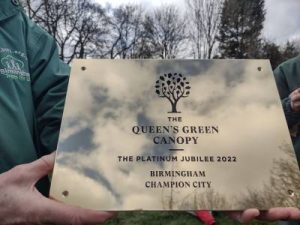 We were joined by great supporters of Birmingham Trees for Life, including the Woodland Trust and 13 volunteers from the amazing Green S Welfare Group who come to join us to plant trees from all over the country, several times a year and are an absolute joy to work with. With them came BTfL’s youngest tree planter, eight-month-old Iknoor, followed closely by Talin, (two) and Sajda, (seven). The Woodland Trust brought 24 volunteers from Lloyds. Members of the same team who hadn’t seen each other properly since the pandemic, so while the trees were planted there was also lots of chatter and catching up to do. Then came what can only be described as 30 bionic children from Yenton Primary School. Full of energy and enthusiasm and itching to get some trees in the ground. Once again the prospect of us planting 1000 trees in a couple of hours or even less, left their jaws dropping. When we saw how fast and furiously they planted the trees – it left our jaws dropping. ‘What trees are we planting today? We like the ones with the red roots!’ That’s Dog Wood,’ we replied, ‘more of a shrub than a tree, but just as good for the wildlife and the environment, along with Crab Apple, Rowan, Oak, Hazel and Hawthorne.’ When one pupil spotted, an acorn hanging off the end of his tree, he was so excited.

‘This tree is going to grow into a big oak tree, isn’t it!’

‘Yes, all thanks to you.’ We replied.

We explained that the second-best tree planters in the country after Yenton Primary School of course, are squirrels.

‘Why because they gather acorns, bury them for a late snack, forget where they buried them and then the tree grows…?’

‘Yes,’ we replied. As one student retorted, ‘well good for us and the planet that squirrels have bad memories, else we would have half the oak trees we do now.

And it proves that while nature always works for us, the human race has some lessons to learn to stop working against it – so say the squirrels, Yenton Primary School and BTfL of course. As the groups spread out across Pype Hayes Park, there was a hive of activity of planting, digging, stomping, chattering, there was a production line of children collecting spades and trees, then more trees and more trees.

And while there was so much going on it left the amazing Woodland Team – the absolute nuts and bolts of the BTfL project finding it challenging to hand out trees fast enough.

We always say if only we cold bottle the excitement and energy that we see again and again with the school children and volunteers who plant trees with us!

While our dedicated committee members Geoff, Sue and Viv, rallied around the groups helping them plant the trees, talking to them about trees, all of us enjoying every minute at this planting event.

So this morning was a morning filled with energy, smiles, positivity, a collective challenge to clean up and green up the area with 1001 oxygen making, carbon dioxide zapping trees,  a strong sense of what community really means and when community really matters! Everyone became emotionally invested in trees -as if they weren’t already. A morning that everyone who joined us will go home and share with their friends and family this evening and tomorrow. A place everyone may revisit some time sooner – or later and point out the trees and claim proudly, ‘here are my trees!’ So a job well done – again.

And lets not forget a morning where our wellbeing was thoroughly worked on, as well left Pype Hayes Park feeling happier, healthier, more energised, revitalised and very proud.

See trees –  they never cease to amaze us more and more with each new day and for BTfL that’s a whopping 5478.633 days so far!

A huge thank you to QGC, Birmingham City Council Cllr O’ Shea, The Deputy to the Lord Mayor, Hayley Caruthers, pupils and staff from Yenton Primary School, Green S Welfare, The Woodland Trust, Lloyds, Simon Needle, Geoff Cole , Sue Griffiths and Viv Astling from the BTfL committee, The Woodland Team and any of the public that took an interest  in what we were doing today.