Well last week saw us back in school and like most students who recently returned to normally schooling after the Summer holidays we couldn’t be happier. It’s one 18-months since we have been in a classroom setting teaching children about trees, but better late than never!

Our first school educational session was with Lickey Hills Primary School. The school had  been so disappointed they couldn’t come and plant with us previously and that the pandemic had stopped us that we promised to visit them in school as soon as we could return. What a lovely morning we had with 60 Year-Six children who were eager to share all their knowledge not just about tress, but about biodiversity, the power of nature, local wildlife, creepy crawlies, parasites and fungi!  With every question we saw a sea of hands waving eagerly at us wanting to share their thoughts, knowledge and opinions – and some the children’s knowledge was encyclopaedic!

We were very impressed.

As much as we enjoyed the classroom setting, when you are talking trees,  there is only one place to be – outside!

In pairs the children darted off in different directions, studying their tree guide and throwing tree names in their groups and discussing leaf shapes, bark texture and leaf fungus.

The black tar like patches on the leaves the Maple trees were spotted immediately. This is a fungal pathogen in the genus Rhytisma has taken hold. When the fungus initially infects a leaf, it causes a small wide, yellow spot. As the season progresses that spot spreads, eventually growing up to 2cm wide. The spreading yellow spot also changes colours as it grows, slowly turning from a yellow-green to a deep, tarry black.

The tar spots don’t emerge right away, but are typically obvious by mid to late summer. By the end of September, those black spots are at full size and may even appear to be rippled or deeply grooved like fingerprints. The fungus only attacks the leaves, leaving the rest of the maple tree alone – there came a collective phew from the children happy that their Maple trees were safe!

Children also looked for and found evidence of Gall Wasps whose tiny cocoons were embedded the tree leaves.

We reminded the children that September is also seed collecting month, discussing the way seeds are dispersed by wind, by animals, water or by exploding. 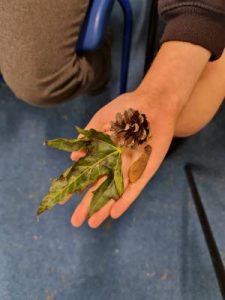 We gave the children some soil and some Birch seeds to plant and nurture in the hope that they will grow and one day, in a few years time we will look up and see the Birch trees amongst all the other native specimens in the grounds of Lickey Hills Primary School – that was an exciting prospect for the children. 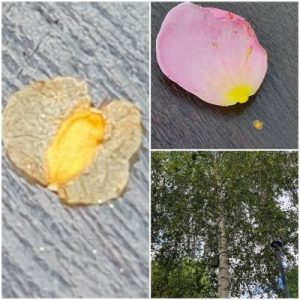 Working small teams was the key and almost all trees had been identified by the time we went back inside to discuss trees some more.

As the children settled back into their seats there was one very important virtue of trees that the children suddenly began to understand – trees affect on our wellbeing.

Smiles, flushed cheeks. energised and a really positive mood radiated around the classroom and we pointed out that  being amongst trees, nature and everything else green spaces have to offer has emotional and physical benefits that might not always be recognised immediately.

The children all agreed that outside waste of they favourite places to be because it made them happy – and after a wonderful morning with the children BTfL agreed that our mood had been enhanced too – not just by trees, but by the children’s knowledge, enthusiasm and passion for nature! 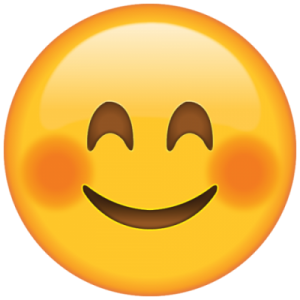